Latest From Our Blog

Use Body Language to read minds 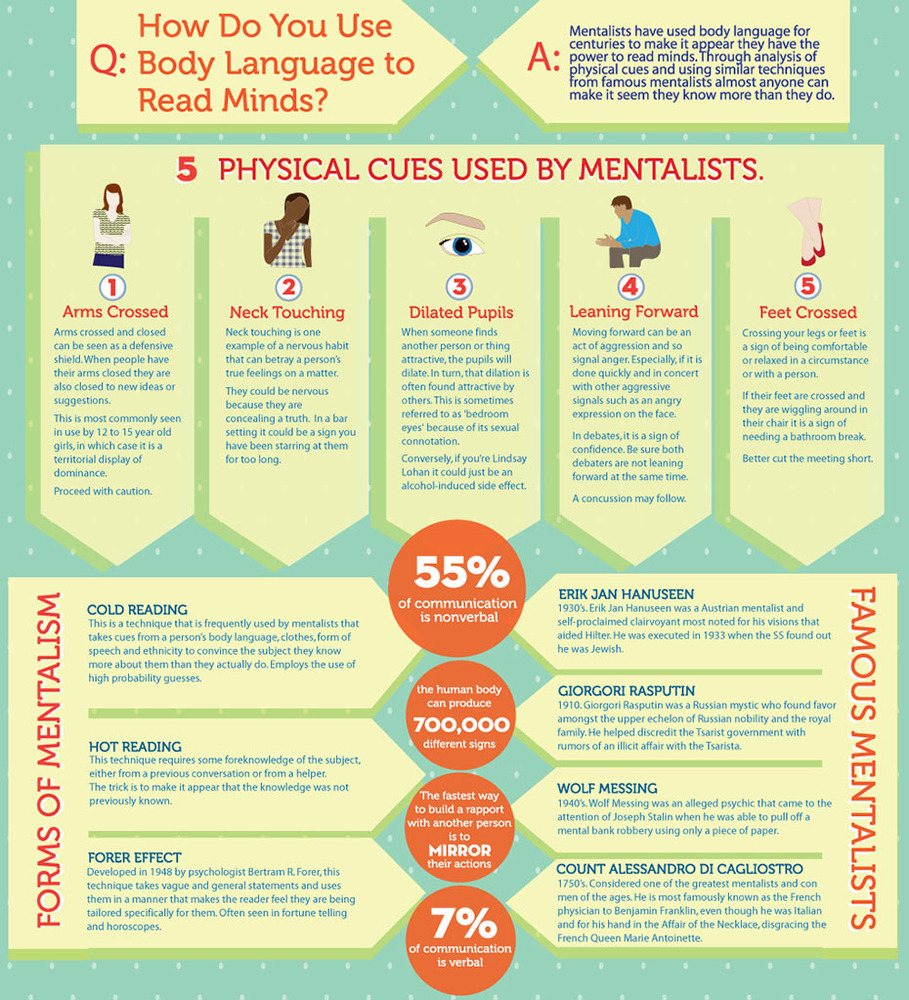 1. The first point and it’s probably the most important is that there is not a one size fits all when it comes to reading people’s body language. People make this common misconception when they learn about reading people’s body language. They may hear or see that if people look to the top left-hand corner as they arrive then they’re accessing the creative part of their brain and are therefore telling a lie. There may be some way in this and you may be right but they also may look to the top left-hand corner just because they’re looking there. Assumed just because do something one particular thing that the telling a lie. You have to look at the whole picture.
2. The second point is also very important. That is that practice makes perfect. That’s quite a blanket statement any can be applied to most anything the life but there are many examples of people especially when dealing with deciphering body language sure that you start doing our subconscious level when you put in a lot of practice. This is a stage you want to get to you want to practice it so much that you don’t have to be reliant upon your conscious decisions. You want your subconscious to be able to pick up on the subtle nuances in people’s body language and then make a decision on instinct. This phenomena is also covered in this video by Orson Welles where you pretend to be psychic to the day. He mentions by then the day you can just instantly see someone tell what what their problem is. He also goes on to elaborate that so Hotel bellboy’s work or used to.

3. Body language varies from person to person. Depending on the context you may get more time to person than others. Take advantage of any opportunity you have spend extended periods of time somebody. For example if some people lying there will develop a nervous smile whilst other people will not. You can really draw something is from either of these if you performing magic usually want get the chance to understand that person individually see have to look at the individual cues and trying to upon the prior knowledge. Some of the biggest using body language are often mistakes. The more unique’s body language are typically the result of nervous dispositions. People put on the pressure made perform acts that you think are tells the lying but it’s really just a Telford be nervous. Try not to use unique non-verbal habits as an indicator.
4. While the major first force people fall into when trying to read body language is paying too much attention to the face there are also lots of signs that will throw you off. People say that the hands have it all. Pay attention to people’s hands people who live can spend more time gesturing with their hands. They tend to do this more than if they were just simply nervous. Don’t discredit the face entirely as are a few Q is there for a lot of the time it involves a combination of hands. Look at Bill Clinton in his interview about Monica Lewinsky. He touched his nose a lot more than is normal approximately every four minutes. This is accommodation of his face and it sounds.
5. If you are a focus on cues in the face the lips can give a lot away. Condit when he was lying on television in 2002 sucked and licked and bit his lips more than 14 times in a television interview. This is an indication that can be nervous but also it cannot say that you are trying to withhold information.
6. Lack of animation. People who are adept at lying are done it frequently will know that you give a lot away we are body language. To counter that they often try to hide their body language. They don’t give anything away with their hands are the body motions saw they have a lack of animation. So being overly controlled in this way can certainly act against you. You can often spot a liar from someone who is to rigid and firm.
7. Finally get the advice from an expert in the field. While you can get quite a few tips from websites such as this year at mentalism central and other websites like wiki how or you tube your not going to get the same level of information in confidence in the information that you going to get from someone who’s done it for a career and published a book on it. If you want to read somebody’s mind or give a appearance in your mentalism acts and being able to tell someone stole I is essential. Adult think is a better place to learn from than “what everybody is saying” it’s written by an ex-FBI agent who is job it was to extract information from people and tell whether they were lying are not. He was a counterintelligence officer’s years to become an expert in non-verbal behaviour. The book is amazing and has over 685 positive customer reviews on Amazon. It talks about how you can speed the people record people’s true intentions and also talked about some of the pitfalls I’ve mentioned in how not to make assumptions of pick up false positives. Even if you don’t want to perform mentalism but you want to build to read someone’s body language this is got to be the best place to start. You can find on Amazon on here